Taking a stance poses risks and opportunities. It may be time to re-evaluate your association’s policy.

In a quick poll conducted by Avenue M in mid-July 2022 with 21 CEO/Association Executives, 67% indicated their association does not comment on policy issues outside the scope of their mission. However, as times are changing, members want to know what their association thinks. It is important to be prepared and know your members and what they care about. (Click HERE to participate in future polls.)

According to one association executive who participated in the poll, their association historically did not comment on social issues because it was not within their scope. However, the murder of George Floyd changed this and resulted in the association developing a plan to increase participation among its minority members. Since then, they admit their association has been inconsistent when it comes to commenting on issues, usually sticking to domestic matters. The association is currently in the process of developing a task force to plan for speaking out on more of these issues as they come up.

Another association executive revealed they address issues that pertain to their scope or their work, as well as issues that deeply affect the community and/or such catastrophic issues that there is no choice but to respond. They cite the murder of George Floyd as one of these cases.

When asked, another association executive shares that their association has never made statements on any issues, with the two exceptions to this being the murder of George Floyd and the Russian Invasion of Ukraine. However, they try to provide their members and staff with access to needed resources. Recently, their association has discussed possibly issuing more statements moving forward, as silence is slowly becoming less acceptable, but they are determined to only speak out on issues within the parameters of their mission. 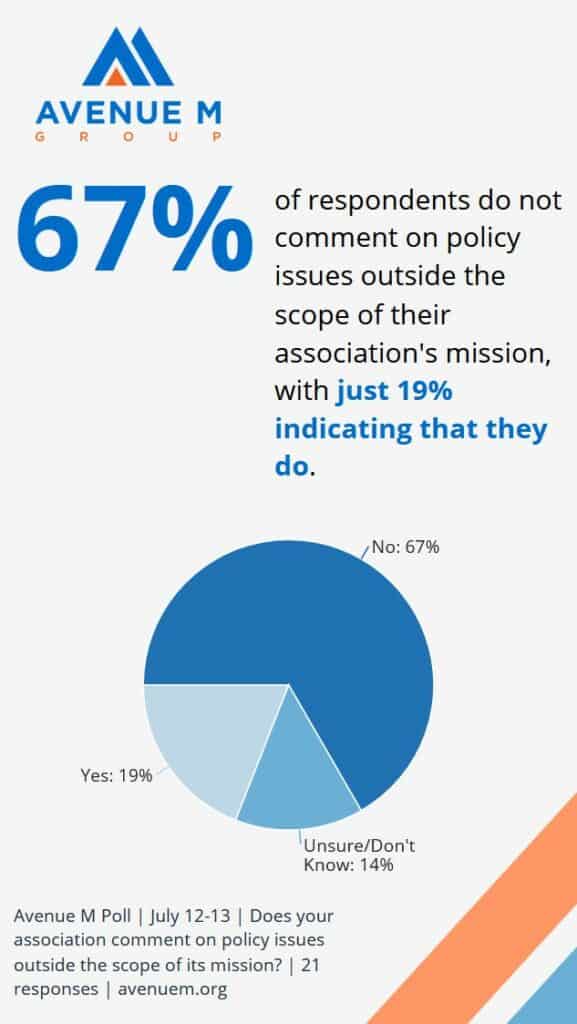 Want to learn more? Read our quick summary of the following articles and click the links below.

When Should You Speak Out on Social Issues?

Is it Time to Take a Stand?

Boost Your Brand by Taking a Stand

Associations Reevaluate Russian Ties Amid Calls for Unity with Ukraine

Note: One interviewed organization is banning Russians from entering their events; however, they did not specify if this meant banning events in Russia or banning all Russians from their events, regardless of if they are involved with Russia or the war. When taking a stance on current events, make sure you don’t go so far as to exclude innocent members.

When Organizations Weigh in on Social Issues

Note: If your organization decides to support a rights movement, it can’t do it halfway. When a company decorates with rainbows during pride month in the U.S. but makes no mention of it in countries where LGBTQ+ rights are contested, people take notice. If your organization doesn’t fully support what it claims to stand for, your members might perceive the organization as superficial and hypocritical rather than supportive.

Want to be the first to be notified about articles like this?

Avenue M Group is a global, full-service marketing research and consulting organization with in-depth expertise in examining why members and prospects believe in brands, organizations and missions.